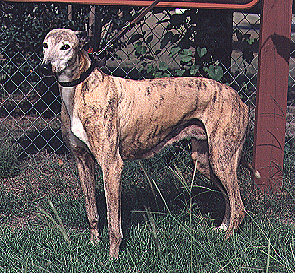 Owned by Dorothy Beckner and Ronald G. Beckner, Buzz Off was bred 11 times and gave birth to 79 Greyhounds, many of which became winners on the Greyhound track. Most widely known were three offspring – All-American and All-World Blendway, All-World Bartie and All-World Buzz Around. She also is the grand dam of two All-Americans, Be Alive and Willow Run Becky.

Blendway and Bartie, two brothers who between them earned in excess of $500,000, were out of Buzz Off and Hall of Famer Perceive.

In 1989, Bartie was first and Blendway second in the Derby Lane Gold Trophy Juvenile Stakes and the Juvenile Stake at Raynham. Bartie had an exceptional year, winning the Tampa Inaugural, running second in the Wonderland Derby and third in the Tampa Distance Classic. The next year, Bartie won the Wonderland Derby and the Mile High Count Down; and also was a finalist in both the Derby Lane Sprint Classic and the Dairyland Cup Invitational.

1990 proved to be a successful year for Blendway, setting the 5/16th track record of 29.81 at The Woodlands. He was named All-American and All-World, winning the Sunflower Stakes and People’s Stakes at The Woodlands and the Coor’s Superstar Invitational at Multnomah. He ran second in both the Winter Sprint Classic and Sunflower Stake at The Woodlands, was third in The Woodlands Inaugural, and was a finalist at the Kansas Shoot Out at Wichita Greyhound Park.

The next year, Blendway finished second in the Winter Sprint Classic and the People’s Choice and was a finalist in the Sunflower Stake and Kansas City Sprint.

Another winner Buzz Off produced was All-World Buzz Around, out of Hall of Famer Dutch Bahama. In 1992, Buzz Around won both the Sunflower Stake and Kansas Bred Derby at the Woodlands. He and his littermates ran out purses in excess of $350,000.

Buzz Off appears in the pedigrees of other All-American and All-World Greyhounds. Betty Bee, a female in the same litter as Blendway and Bartie, produced All-American Be Alive and also Bee Lite, the winner of the 1995 Futurity at The Woodlands.

Bred to BJ’s Justin, Buzz Off produced Bestive, the dam of All-American Willow Run Becky. Out of Blendway came a grandson, Great Son, an All-American who was the winner of the Hollywood Classic. Buzz Off’s granddaughter, Be Alive, out of Bartie, was All-World in 1993 and 1994, winning the 1993 Wonderland Derby and finishing third in the Grady Sprint at Revere. In 1994, Be Alive won the Sunflower State at the Woodlands and was a finalist in the Wonderland Derby.

Buzz Off’s granddaughter, Be Limited, out of Bara Buzz, won the Kansas Bred Derby at the Woodlands with litter mates Be Orderly Boy and By By Boom Boom running second and fourth, respectively.