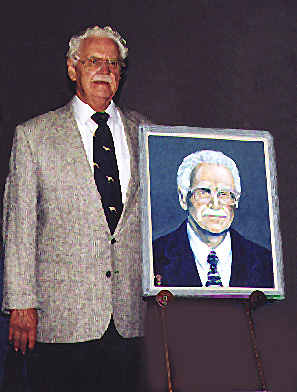 The first thing Carroll Blair remembers hearing “was a dog,” he once quipped. The son of Greyhound industry pioneer Merrill Blair, Carroll was born on Oct. 14, 1931 in Jewell, Kansas. His father was in partnership with Cal Ohlinger racing Greyhounds all over the country. Thus Carroll was introduced to the Greyhound business at an early age and was reared in Kansas, Massachusetts and Florida. After graduating from high school, he worked full-time with the Greyhounds for his father. Ohlinger and the Blairs were best known for racing one of the sport’s all-time greats, Hall of Famer Flashy Sir.

After Ohlinger’s death, Carroll and his brother, Clinton, became partners with their father in Merrill Blair and Sons. While the elder Blair took over the farm chores, Carroll handled Hollywood, Miami Beach and Southland and Clinton made the Colorado circuit. Eventually, the kennel became known as Blair Brothers and raced at Hollywood, Miami Beach, Flagler, Biscayne, West Palm Beach, Daytona Beach, Pensacola, Loveland and West Memphis.

When the brothers decided to go their own ways, Carroll raced in the East and Clinton in the West. Carroll built his kennel into a winner in the 1960s, producing such stars as Texas Bum and Jeno’s Leo Go. More recent racing greats were Jimmy’s Mile, Land and Iowa Park.

His success at the track has been evident over the past 40 years, but his contributions to the industry in other ways have been overwhelmingly significant.

Kip Keefer, who nominated Carroll Blair for the Hall of Fame, wrote: “His accomplishments and benevolent contributions have impacted American Greyhound racing proving that one dedicated individual can indeed make a difference.”

Blair has served on the National Greyhound Association board of directors for many years and also assumed the leadership role of vice president. Always willing to be involved and make a contribution, he worked on numerous NGA committees.

He currently is the president of the Greyhound Hall of Fame board of directors, of which he has been a member for a number of years and was vice president for several terms.

“His support and unwavering devotion to this business and the people in it has been a source of inspiration for many,” Keefer wrote. “He has never been afraid to stand up for what he feels is right. The result has been many persons in the Greyhound industry benefiting tremendously from his tireless efforts.”