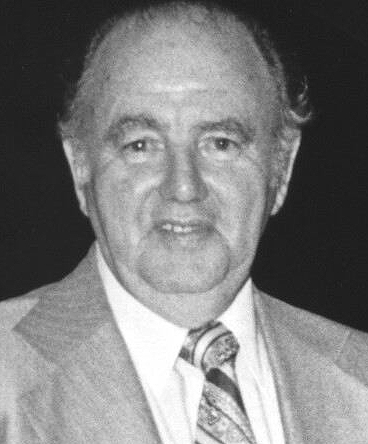 Known for staying up all night nursing a sick or injured greyhound belonging to a colleague, Don Cuddy once told Turnout magazine: “Any day you can get up in the morning and do a favor for a friend, that makes it a good day.” His successful career included being an international representative of the sport as well as a trainer, a breeder, an owner, a broker of greyhounds, and the managing director of a track.

When only eight years old, Cuddy took greyhounds to races in Dublin, Ireland with his father. As a teenager, he worked after school with Jack McAllister who had a greyhound named Hi There, one of Ireland’s greatest sires inducted into the Hall of Fame in 2000. By the time Cuddy was 17, he had his own coursing greyhound in his first stakes final. His early days in the business were spent in his native Ireland, taking some excellent greyhounds to Catford Stadium in London. While there, he imported greyhounds of Irish blood.

Cuddy developed a small, but very successful racing kennel and won prestigious stakes races including the Easter Cup at Shelbourne Park in Dublin, the Grand National at Kilkenny, and the Marathon Championship.

He then turned to the administrative side of the industry when he became a racing official at Shawfield Stadium in Glasgow, Scotland. Six years later, he returned to training greyhounds, teaming with Pat Dalton to race in the United States. Dalton’s exceptional breeding philosophy and Cuddy’s skilled training methods made racing history, winning most of the prominent stake races in the country over the years, including the world Greyhound Classic at Hollywood and the World Sprint Classic at Wonderland.

In the July 1982 issue of Turnout, Dalton said Cuddy “has few if any equals in training greyhounds.” Named the best trainer of the century by The Greyhound Review, Cuddy was in charge of three greyhounds that became members of the Hall of Fame. Rocking Ship* was the first Irish import inducted into the Hall of Fame, in 1980. Rocking Ship* smashed several track records and was unbeatable over the marathon course, winning the Flashy Sir Award in 1972 and 1973. Downing, inducted into the GHF in 1984, broke several track records in both sprint and distance, and won the Rural Rube Award in 1977. K’s Flak, inducted in 1987, also broke numerous records on his way to winning the Flashy Sir Award in 1979. All three had the winning combination of speed and “desire,” Cuddy said in an article in Turnout magazine.

After his retirement, Cuddy was chosen to be the trainer of U.S., Irish and English greyhounds for the Inaugural International Greyhound Racing Carnival held at Sandown Greyhound Park in Melbourne, Australia.