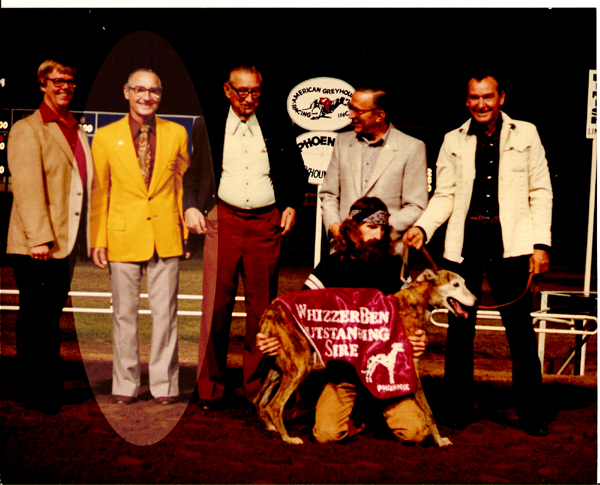 Born into the Greyhound lifestyle on Oct. 2, 1923 in Hanford, Calif., Donald R. Wootten was the son of Lucile and Jim B. Wootten. As a youngster, he cared for the Greyhounds raised by his father, “Pop,” who is memorialized in the Pioneer Section of the Greyhound Hall of Fame. The young Wootten graduated early from high school in 1940 at age 16, and lived in California and Oregon where he worked at various jobs such as a shelf stocker, produce manager, shipyard expediter and ship fitter.

Wootten joined the Air Force in 1943, and following basic training in the infantry completed an engineering program at the University of Pittsburgh. His service included aerial gunnery school, instructor training, and gunnery instructor on B-17 aircraft until honorably discharged following World War II.

Wootten returned to his family’s business where he raised and raced Greyhounds in Oregon, Arizona, Colorado, Florida and Mexico. While racing a kennel during Pueblo’s first meet in the summer of 1949, he met his future wife, Janet Lee Andler of Missouri. According to their daughter, Leslie Wootten, the 19-year-old college girl married the 25-year-old dog man later that summer, beginning a 49-year union that lasted until his death in 1998.

“Their honeymoon was a harrowing road trip from Pueblo to Phoenix pulling a trailer of Greyhounds through Arizona’s Salt River Canyon noted for its hairpin curves on cliffhanger roads,” Leslie Wootten wrote. “Although there were many close calls on that treacherous journey, the only casualty was Janet’s new suede jacket ruined by the worried clutch of her sweating palms.”

The couple traveled many miles together with Greyhounds during the next several years, before Don’s career changed dramatically in the fall of 1953. Instead of raising Greyhounds, he began tending to a racetrack as Assistant Plant Superintendent at Phoenix Greyhound Park. His daughter said that during the first few months of his employment, he participated in the frantic construction leading up to the gala opening of a new state-of-the art racetrack built and operated by the Funk family. A year later, Wootten was appointed Superintendent of Tucson Greyhound Park. The position included the benefit of a house to live in on the racetrack grounds; there would be no more traveling across the country with Greyhounds for the couple with two young children. The family stayed there for 11 years.

Wootten made his greatest contribution to the racing industry while at Tucson. Relying on his engineering knowledge, he designed and built a machine used on the track’s surface that is still used by some tracks. The equipment made the tracks safer for Greyhounds by creating a uniformly smooth, yet cushiony, surface. Fred Whitehead, longtime kennel owner and builder/owner of Loveland’s Cloverleaf Kennel Club, commented on the invention in the July 17, 1958 issue of Southland News : “This Wootten track machine is the greatest thing that has happened to dog racing in a long time,” Whitehead is quoted as saying. “Never before has it been possible to offer racing Greyhounds a perfect running surface; this does it.” The July 30, 1958 issued of the West Memphis Evening Times reported the new implement “combines the duties of several conventional surfacing implements and cuts downtime and cost while increasing the footing provided. It harrows, levels, crushes and rolls the soil to bring the footing to desired texture and maintain it without variation from day to day…consistent footing brings consistent racing.”

When the Funk family expanded their Arizona circuit beyond Phoenix and Tucson, Wootten was promoted up the chain of command. In 1964 he was named the Presiding Steward at Amado and Tuscon Greyhound Park, becoming the Assistant General Manager of both tracks in the fall of 1966. In 1968, he was promoted to Director of Racing for all six of the Funks’ Greyhound tracks in Arizona, becoming one of the youngest, but most experienced, racing directors in the business, according to the Aug. 17, 1967 issue of the Greyhound Racing Record . He served as Director of Racing for 19 years; then, before retiring in 1992, Wootten was Track Steward at Phoenix and Apache Greyhound Park.

Another of Wootten’s accomplishments during his tenure as a racetrack official was the implementation of the University of Arizona’s Race Track Industry Program and its annual symposium in the early 1970s. Wootten also contributed to the industry by serving on the National Greyhound Hall of Fame Board of Directors for many years. His great interest in Greyhound history developed into his hobby of tracing the bloodlines of contemporary Greyhounds to their early ancestors, often referring to a rare Greyhound studbook collection he had purchased.