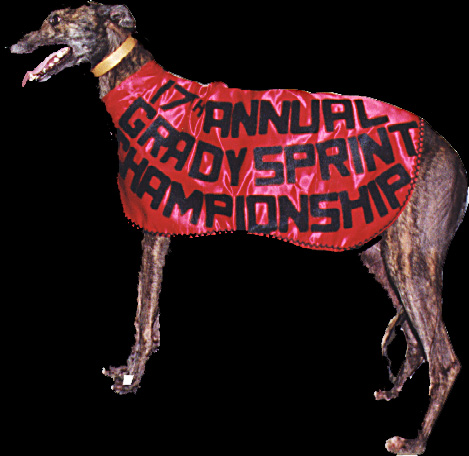 Owned and raised by Elwyn E. Jackson of Theodore, Ala., EJ’s Douglas has been called the best sprinter of the 1990s. Douglas, a brindled son of Hey Vern and Abigail Girl, was whelped in December of 1990.

EJ’s Douglas’s home track was Southland in West Memphis, Ar., where he was trained by Bob Marriott of Marriott Kennel. During his traveling years, he was trained by Jesse Wallace of Kerry Patch Kennel at Biscayne in Miami, Susan Hoopes of Dorsey Kennel at The Woodlands in Kansas City, and Jim D’Ambrosia of Elliott Kennel at Wonderland in Revere, MA.

In 1992, EJ’s Douglas went non-stop from Maiden to Grade A, winning eight races in a row. He was second in the Florida verses the World Stake (Biscayne) in his 17th lifetime start.

The next year, he won the National Greyhound Association’s Rural Rube Award and was named to the All-America Team and the All-World Team after winning 66 of 80 starts that included 18 in a row. He set an Arkansas course record at Southland, won the Southland Inaugural and the Irish-American Classic at Biscayne, and placed third at The Woodlands Winter Sprint.

In 1994, he joined Hall of Famer JW Rocket One as the only two-time winners of the NGA’s Rural Rube Award. Douglas also was named to the All-America Team and the All-World Team for a second time. He won the Southland Inaugural for the second time, won the Woodlands Winter Sprint and the Grady Memorial at Wonderland. He set an Arkansas course record and won 26 of 27 starts between Southland and Wonderland.

EJ’s Douglas returned to Miami/Biscayne in July of 1994 to defend his Irish-American title, but, after winning the first two rounds, suffered an injury in round three that ended his career.

EJ’s Douglas was retired to stud at Strickland Sires in Abilene, Ks., where he ranked third in the 1998 final sire standings even though he sired at least 500 puppies less than the number one and two sires.

Some of his offspring include Gaffer, winner of the 1998 Tampa Juvenile Stake; Grey’s Excalibur, winner of the 1998 Marathon Stake at Tampa and Tampa Derby; RL Annett, Dairyland Au Revoir and Inaugural winner; Praetor, 1998 Hot Box Winner Mile High and Cloverleaf; Kola Cora, Damis and Magic Skipper who have all placed well in various races.

EJ’s Douglas, through frozen insemination, is rapidly rising in the Australian sire standings as well.