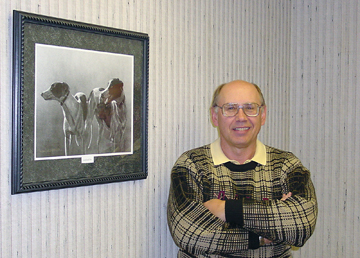 Gary Guccione join 42 other individuals inducted into the Greyhound Hall of Fame since 1973 in the fall of 2009.

Guccione has been involved with Greyhound racing virtually his entire life. When eight or nine years old, he helped on his father’s farm and racing kennel near Butte, Mont. Soon after, he became a paddock helper at the Butte racetrack.

In 1965, while working his father’s Greyhound farm in Great Falls, Mont., 16-year-old Gary began compiling the sport’s first-ever Brood Matron Standings. The compiled standings were published for years in the Greyhound Racing Record. Later he assumed responsibility for compiling the All-Grade and the Top-Grade (Grade A) Sire Standings for the same American Greyhound Track Operators Association (AGTOA) publication. He soon followed these compilations with feature articles on breeding. In the early 1970s, Guccione also began contributing a regular column, usually written on the subjects of breeding and bloodlines, to the National Coursing Association’s Coursing News.

As a student at the University of Montana, Guccione spent his summers working for Greyhound Hall Of Fame inductee Ken Guenthner at the Black Hills Greyhound Track in Rapid City, S.D. There he worked in a variety of capacities including chart writer, publicity director, announcer and associate judge while still assisting in his father’s Greyhound puppy kennel. It was while working at the track during the fourth of five summers there that he met his future wife, Terri, who just happened to be the lure operator’s daughter.

In 1971, he joined the staff at the National Coursing Association in Abilene, Ks., serving as assistant secretary and managing editor of Coursing News. His first assignment was to revamp the monthly magazine, which was eventually re-named Greyhound Review. He also produced a fund-raising brochure designed to help finance the building of the Greyhound Hall Of Fame, which was completed in 1973.

Guccione’s obsession with bloodlines and pedigrees resulted in hundreds of articles in industry publications over the past 45 years. He’s also written seven books on Greyhound breeding and bloodlines, including an introductory breeding book, as well as four volumes of Greyhound Breeders Journal and two volumes of Great Names in Greyhound Pedigrees.

Following the death of the NGA’s chief officer Norman McAsey, later a Hall Of Fame inductee, Guccione was in 1982 appointed the NGA’s secretary-treasurer, Keeper of the Stud Book, executive director, and executive editor of the Greyhound Review. He continues to work in these positions that he has held for 27 years thus far, longer than any NGA director in the association’s 103-year history.

During his tenure as NGA director, Guccione presided over the transition to a computerized registry system and has been instrumental in developing and enforcing the rules and guidelines for all the registry’s modern-day programs, including the DNA, Frozen Insemination and Inspections programs. Through its efficient and cost-effective registry system, which Guccione says still offers the lowest prices and quickest turnaround time of any Greyhound registry in the world, the NGA has been able to financially contribute to numerous worthwhile projects and programs within the industry, including the Greyhound Hall Of Fame and important state Greyhound association initiatives. The DNA and inspections programs, combined with a vigilant approach by NGA leaders, have drastically reduced the number of practices and incidents that would compromise the integrity of the registry. By doing so, today’s NGA Stud Book is vastly more accurate and credible than those published in any other era of the association’s history.

Throughout his years at the NGA, Guccione has been actively involved on numerous legislative and racing-commission fronts, both at a state and federal level, pushing for legalization, legislation, rules and guidelines that would benefit Greyhound owners and breeders, and the industry as a whole. This was especially true in the 1980s when several Midwest states were pushing for legalization. He served on the Kansas governor’s Advisory Committee to the Racing Commission just prior to the advent of pari-mutuel racing in the state.

In his NGA position, Guccione still orchestrates the NGA meets in Abilene twice each year. Despite much upheaval in the industry in recent years, the NGA meets remain highly popular and successful. The Track Stakes and Auction programs have evolved into major events for members to showcase, buy, sell and lease young puppies. The Meet’s social agenda continues to attract hundreds to Abilene, Kan. each April and October.

Guccione also has been at the forefront in the industry’s efforts to address animal-welfare issues. He is the last of the original founding members still serving on the American Greyhound Council (AGC), created in 1987 as a joint effort between the NGA and the AGTOA. As the AGC’s full-time coordinator the last 10 years, with the NGA office also serving as the AGC’s headquarters, Guccione was instrumental in publishing, editing and distributing the textbook Care of the Racing Greyhound and its recent sequel Care of the Racing and Retired Greyhound, one of the AGC’s most significant achievements. He has been at the forefront of all the AGC’s other major projects in the last 22 years.

The NGA’s inspections program, funded by AGC and overseen by Guccione, along with a stricter code of rules governing Greyhound welfare have resulted in the banishment from the sport of scores of individuals who were lax in their stewardship over the care of Greyhounds. In many of all those cases, Guccione was in charge of the investigations that led to those disbarments. In the end, the general care of Greyhounds at all levels, and especially on farms, has been upgraded due to the enactment and enforcement of these rules.

Dealing with humane issues through both the NGA and the AGC, Guccione was inevitably thrust into the center of the Greyhound adoption arena. In the last 15 years—and especially in the last five years—he has worked diligently to improve communication, cooperation and understanding between the industry and the adoption world, ultimately resulting in the placement of more retired Greyhounds into homes as pets. These efforts have demonstrated to the adoption community, the media and others that the industry sincerely cares about the well-being of its canine athletes before, during and after their racing careers.

Guccione’s role in this regard has not gone unnoticed. The world’s largest Greyhound pet organization, Greyhound Pets of America, presented Guccione with the Joan Dillon Award as the Greyhound Adoption Person of the Year in 2007.

Besides the AGC, Guccione has served on a variety of other industry committees over the years, including the Race Track Industry Program’s Advisory Committee, the NGA/AGTOA Liaison Committee, the Greyhound Hall Of Fame’s Board of Directors and selection committee, the AGTOA’s Adoption Committee, various committees of the World Greyhound Racing Federation, and the World Alliance of Greyhound Registries. He is the senior member of the World Alliance of Greyhound Registries, and his work in that organization has helped preserve the integrity of bloodlines internationally. Foremost has been the establishment of uniform rules and procedures among the major registries with respect to DNA and Frozen Semen. This has allowed for today’s relatively smooth exchange of frozen semen among countries and recognition of DNA registrations and profiles, thus eliminating the need for duplicating DNA collection.

As an NGA, AGC or industry spokesperson, Guccione has made countless presentations on a wide variety of industry topics at the Canine Sports Medicine Symposia and other veterinary assemblies, AGTOA and WGRF conferences, the annual Race Track Industry Program symposia, pet adoption gatherings, RCI and other racing commission conferences, state and federal legislative hearings, and state Greyhound association meetings.

He still enjoys writing the Greyhound Review’s popular “Footnotes” column, submitting more than 420 columns during the past 35 years. His “Greyhound Of The Month” feature, now in its 28th year, still deals with one of his first loves in the game—Greyhound bloodlines.

Guccione resides in Abilene with his wife, Terri, and the youngest of their seven children. They have 11 grandchildren.