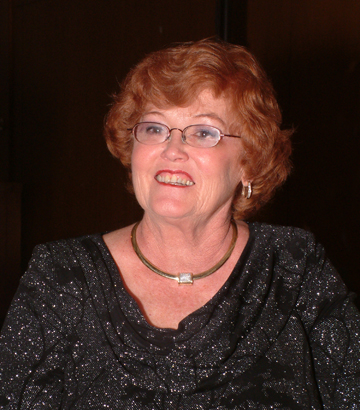 Kay Smith, who has experienced outstanding success as a Greyhound breeder for over 25 years, became only the second woman honored in the Greyhound Hall of Fame when she was inducted into the Hall of Fame in the fall of 2009.

Smith joined 42 other individuals inducted into the Greyhound Hall of Fame since 1973. The only other woman inducted in the Hall of Fame is Hannah Smith, who was the High Commissioner of the International Greyhound Racing Association that oversaw 17 racetracks in the United States, Canada and England. The other 60 inductees in the Hall are outstanding Greyhounds.

Kay Smith first began raising Greyhounds in November of 1982 in Mansfield, Tx., and moved to her current farm in Frederick Ok., in February of 1983. Her husband, Art, worked for three years in California with most of his earnings going into the establishment of their Greyhound farm.

Kiowa Sweet Trey also was the NGA’s Rural Rube Award winner in 2002 as the top sprinter. The son of Oswald Cobblepot and TM’s Sweet Dream, won his first 16 races at Wheeling, the Derby Lane All-Star Kennel Preview and the Inaugural. He ran second in the Hollywood World Classic and third in the Derby Lane Sprint Classic. Kiowa Sweet Trey was the top sire in the country at the time of his death on July 15 of this year. His offspring included two Rural Rube winners, Flying Stanley and Starz Jenko, one Flashy Sir award winner in Flyin Bridgeport, and seven All-Americans that included Igoby Brady, Kiowa Delicate, Flyin Bridgeport, Flying Stanley, Kiowa Wish Frank, Flying Mancini and Starz Jenko.

Smith has been active in the industry with her support of and contributions to the Greyhound Hall of Fame and state breeders groups. She also supported the National Greyhound Association’s Pup Giveaway program, contributing a puppy as a prize for this year’s fund-raising program.

For many years, Smith attended and participated in National Greyhound Association meets in Abilene. She and her husband Art, who died in 1998, were very active in the early years of the NGA auctions. With a high percentage of their Greyhound puppies in the ring being sold, they contributed to the auction’s growth in its formative years as well as its continued success. At one time the couple had sold more Greyhounds through this auction ring than any other farm or kennel operation.

For a number of years, Smith sponsored the Art Smith Memorial Picnic at Red Bud Lake near Abilene for those attending the NGA’s semi-annual events. In October of 2000, she was the NGA Fall Meet’s Banquet honoree.

Smith was born in San Antonio, Tx., and, as the daughter of a military family, moved often, graduating from high school in Midwest City, Ok. In 1977, she married Art Smith. She became the mother of six children, Dave, Daniel, Gale, Lynn, Carol Ann and Cindy, three step-children, Shane, Lori and Kim, and one adopted daughter, Sherry. Gale’s daughter, Leila Hunt, was recipient of the Hall Of Fame scholarship in 1999 and was named Miss Greyhound.