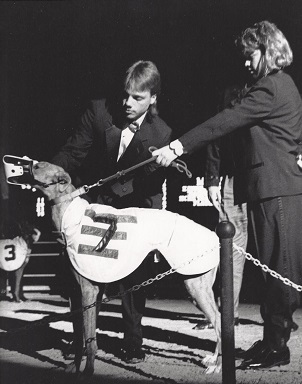 Winner of the 1991 Greyhound Race of Champions

This photo was taken at the 1991 $100,000 Miller Invitational at Dairyland Greyhound Park.

The red brindle son of Jig Jag Mo and Mo’s Silver was whelped in January of 1990 and owned by Recko Enterprises.  In 1991, Mo Kick began his stakes career by winning the St. Croix Derby in Wisconsin.  He won 13 straight races that first year, capturing the Flagler track title with nine wins in 15 outings.  He also won the $200,000 final of the Greyhound Race of Champions at Orange Park Kennel Club in Jacksonville, Florida.  For his efforts, he was named captain of the 1991 All-America Team.