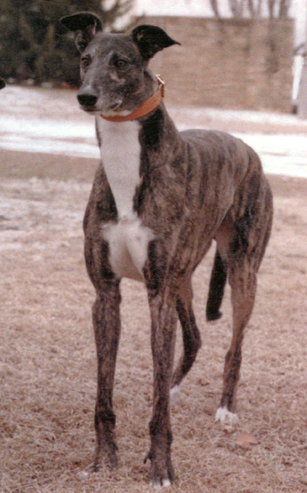 The brindle son of HB’s Commander and Mystic Rose, Molotov was whelped in December of 1994 and was bred, owned and raced by the Ryan Farms Kennel of Abilene, Kan.

Molotov broke the track record at Abilene Greyhound Park before moving on to Mile High Greyhound Park where he won his first outing despite trouble, the Great Expectations stake for young puppies, in June of 1996. In his next start he demolished a Grade D field by 15 lengths to set a new track record of 31.19. In Grade C, the winning margin was 19 lengths with a 31.30 time. Then in Grade B, his fourth career start, he again won by 15 lengths and set a new track record with a time of 30.96. He won his next race, his first Grade A outing, with a come-from-behind effort, and then won his sixth outing with a 12-length Grade A victory. Unfortunately, the 79-pound speedster then suffered a career-ending injury.

Retiring early with such an outstanding racing career, Molotov quickly became one of the most sought after and most used sires in America, fathering more than 7,600 puppies by the time he died in 2006. It took only three years for him to rise to the Number One spot in the U.S. Sire Standings, and he continued to capture sire championships for five consecutive years, from 1999 to 2003. Molotov was continuing a family tradition as his father, HB’s Commander, was the sire champion for four years, from 1994 to 1997, and a distant ancestor, Rocker Mac*, is the only sire in history that won seven sire titles, 1959 through 1965. Molotov joins both HB’s Commander and Rocker Mac* in the Hall of Fame.

Three of Molotov’s offspring were named to All-America Teams, Courageous Nicky in 2001, Rooftop Moby in 2003, and Dustin The Way in 2004. Many other puppies have won stake events and track titles around the country, or have become outstanding producers. Craigie Whistler is among the Top Five in today’s Sire Standings and has produced All-Americas as well. Other Top 20 sires include DK’s Prime Time and Grenade; and, listed in the Top 10 dams in 2005 was PHX Utep.

Molotov’s line continues to flourish with more than 10 percent of all sires and dams on the 2006 Sire and Brood Matron Standings products of this terrific Greyhound.