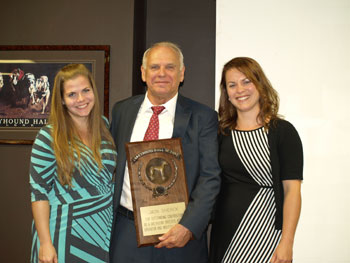 Born in Freemont, Ohio, on May 15, 1940, Noble John “Jack” Sherck, Jr. has spent more than 50 years involved with greyhound racing as an owner, breeder, trainer, salesman and promoter of the sport. His love of dogs began early.

After graduating from high school in Toledo, he headed west and spent a year working in California before joining the Air Force. While stationed in Scotland, he saw his very first greyhound race at Powderhall Stadium in Edinburgh. The cheering crowd and canine athletes wowed the young airman. Soon, he owned two Scottish racers and his life’s passion was set. Following his military duty, worked for a year, saving enough money to buy a kennel of racing greyhounds in 1964 at Caliente in Mexico. . He lived in a dive motel near the track, supporting himself and the dogs on about $300 a week, which was what his racers earned after he got them in shape.

In the 1960s and ‘70s, Jack joined the racing circuit north of the border, traveling with a trailer of greyhounds from Arizona to Colorado to Oregon. It was a 24/7 lifestyle of working hard and playing hard with plenty of competition and camaraderie to go around.

Jack’s many years in the sport have been full of highs and lows. Burn-out forced Jack to step away from greyhounds for months or years at a time to work in other venues such as magazine publishing and network communications. Inevitably, though, he circled back to the dogs with renewed energy and innovative ideas.

An early endeavor included successfully getting an initiative on the California ballot to legalize wagering on greyhound racing in the mid-1970s. As the 1980s unfolded, he also worked to establish the sport in Reno, Nevada. Although the California and Nevada efforts were defeated, Jack never regretted the two attempts to do something great for the greyhound racing world.

Overall, the 1980s were years of growth for Jack. Highlights included selling millions of dollars worth of greyhounds to people from all walks of life and syndicating studs such as P’s Rambling, Bon Bon Patriot, Profits Andy, Black Aztec and Billy Bale.

Other highlights included publication of a magazine called Racing Life and initiation of the Racing Life Series, a futurity for young pups that helped youngsters such as Ebony Power, Kiowa Hustler and Fuel’s Stargazer achieve stake racing renown.

Jack was also involved in “boots on the ground” kind of work. For example, he served on the NGA’s Board of Directors from 1977 to 1980. One of his accomplishments on the board was to collaborate in the development of a greyhound auction for the NGA meets The auctions began in 1980 and became a staple that helps support the NGA while providing attendees an opportunity to sell and purchase quality racing and breeding stock.

As the 2000s unfolded, Jack returned to the dogs after a hiatus in the 1990s. The cover of the December 2002 Greyhound Review proclaimed, “Jack’s Back,” and indeed he was, starting over with the help of friends and family that gave him opportunities to get back in the game. Ultimately, he developed a stellar breeding and racing program. One of the highlights of that period was winning six Main Stake titles at the NGA’s 2002 fall meet.

The inaugural Derby Lane Million that came along a few years later started as one of Jack’s ideas that connected with enough people to catch fire and grow into the biggest event greyhound racing had seen in decades. It was Jack’s brainchild, but it took a community to come together and make the magic happen. And, magic it was. The big finale on March 6, 2006, had over 9,000 fans packed into Derby Lane on a crystal clear night to watch Greys Calibrator win the richest race in greyhound history. The magic repeated a year later when more than 8,000 fans saw Flying Stanley win the top prize.

The Million was an important milestone in Jack’s life—one that infused new hope, spirit, and enthusiasm in the greyhound racing world for him and everyone with passion for the sport. It was certainly an experience to cherish.

Nowadays, Jack is hale and hearty at age 74. He has settled into life as a “happily single man” in North Palm Beach. His daughters are grown with full lives of their own. Amanda is a veterinarian, Rachel is an attorney, and Jack is a proud parent.

When it comes to greyhounds, Jack still has passion, savvy and luck on his side. For example, he owns All-America Kiowa Producer with Smith Greyhounds. Running for Magic City Kennel, the brindle male won several prestigious stake races in 2013, including the Mardi Gras World Classic and the Southland Sprint Derby.

The ideas keep coming, too. Jack and his friend, Jimmy Smith, often put their creative heads together and usually have several greyhound racing promotions in the works.

In a recent interview, Jack admitted he has never been one to volunteer for neighborhood-watch programs, Boy Scout leadership, or local politics. “My community, and my community service, has always been greyhound racing—the sport, the people, the dogs,” he said. “It will be my community until I die. If I can help, I will.”

And, Jack, it is your community that now welcomes you to the Greyhound Hall of Fame.