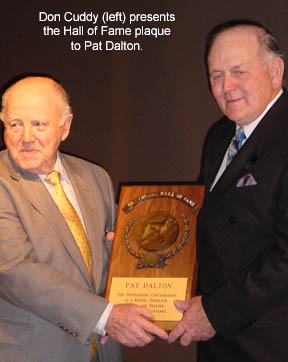 Pat Dalton, of Golden, County Tipperary, Ireland, owned his first Greyhound at age nine, following in the footsteps of his father, John, who raced Greyhounds as a hobby. By the time Pat was 17, it was no hobby; the younger Dalton was making his living racing Greyhounds.

In 1962, Dalton brought a specially selected team of Irish Greyhounds, including champion Gleaming There*, to compete against American-bred Greyhounds in the United States. He handled the Greyhounds for the Bord Na gCon (Irish Greyhound Board), with the hopes of increasing the Greyhound export trade to America. In later years, Dalton brought his own teams of racers to international racing classics, primarily at Biscayne. He made a number of valuable sales, thus expanding the Irish bloodline influence on the American breed. In addition, bringing Irish Greyhounds to race in the U.S. increased interest in international racing and had a tremendous impact on the sport in general.

In the past 10 years, Dalton was still instrumental in promoting international racing, taking teams from Ireland and America to Australia to compete in the International Top Gun in Melbourne.

Dalton bred one of the greatest marathon racers of all time, Rocking Ship*, whom he brought to the United States in the early 1970s. Rocking Ship* won every major marathon event in South Florida and broke numerous records. He was a two-time All-American and two-time winner of the Flashy Sir Award. He was inducted into the Greyhound Hall of Fame in 1980, and was the first Irish import to have that honor.

After establishing his own kennel here, Dalton captured the Kennel Championship at Wonderland in six different years. His kennels raced Hall of Famer K’s Flak when he won the 1979 Wonderland Derby, and Hall of Famer Downing, a 1977 All-America team captain and Rural Rube Award winner.

According to an article in The Greyhound Review, Dalton overcame an obstacle in the late 1970s when an owner’s strike and poor breeding affected his kennel standing. He decided to take quality brood stock back to Ireland, including American sires and Irish-bred females, to breed and raise in Ireland himself. Then the puppies were sent back to America to race.

“The result was the most ‘Irish’ racing kennel in the United States, and the most ‘American’ breeding farm in Ireland you could ever imagine,” the article stated. His breeding farm, in two locations, differed from others in Ireland because of the American influence that eased the Greyhounds’ transition to racing in the United States, where eventually Dalton raced exclusively. Making as many as 12 trips a year between the two countries, the article stated Dalton may have been the “most traveled Greyhound operator in the world.”

Many of the best racers and breeders in the sport are of Dalton’s Irish bloodlines. The breeding of Dalton’s Maythorn Pride to American export Sand Man resulted in five legendary dams from which a growing percentage of America’s stock descends.

“There is today in this country a very distinct Dalton Line that continues to permeate the pedigrees of many of the best racers and breeders in the sport,” said Gary Guccione, National Greyhound Association executive secretary. “The contribution this line is making to the American breed is significant and lasting.”