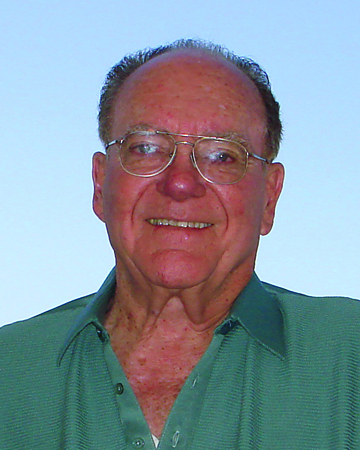 P.C. Hartwell was born on Oct. 17, 1926, and soon was traveling with his father, Paul Hartwell, and grandfather, Everett Clayton “Butch” Sanders, as the two raised and raced Greyhounds throughout the country. Before P.C. was two years old, he had traveled over 20,000 miles from racetrack to racetrack, according to his mother, Zelma, who recorded the fact in his baby book. As P.C. grew, he began assisting his grandfather with feeding the Greyhounds in the racing kennel.

In 1937, the year P.C. turned 11 years old, his family moved to south Florida. His new assignment that winter was no longer in the kennel; instead, he began cooling out Greyhounds at Hollywood Greyhound Track for 10 cents a dog.

That same year, P.C. made his first wager. He split the cost of the $2 place bet with a friend and the two chose Brilliant Rose, owned by Fred Whitehead. The Greyhound placed and Hartwell won 60 cents, equal to walking six dogs.

When his grandfather retired from racing, 13-year-old P.C. became a lead-out at Hollywood. During his early teenage years, he also was a lead-out at Biscayne and Council Bluffs Greyhound tracks. In 1944, Hartwell graduated from high school, where he was voted the most popular guy in his class. Just four days after the graduation ceremony, he enlisted in the Army.

After being discharged from the Army, Hartwell returned to Biscayne where he worked odd jobs around the paddock. When a racetrack opened in North Carolina in 1948, Hartwell became the track’s scale clerk and patrol judge.

His big break came when tracks opened in Morehead City and Moyock, North Carolina, and he was named presiding judge even though he was only 24 years old. For the next few years, he worked several jobs at different tracks in North Carolina, Denver, Colorado Springs and Loveland, Colo., Phoenix, Ariz., Billings, Mont., West Memphis, Arkansas, and at a horse track in Grand Junction, Colo.

After Cloverleaf opened in Loveland, Co., Hartwell worked there until he was contacted by Lloyd Shelhamer, founder of United Tote, who offered him a job at Billings, Mt. On his way back to Florida, Hartwell worked as publicity director at the Rapid City, S.D., track and returned there the next year as general manager.

After working at Billings, he dreamed of opening a racetrack in Great Falls, Mt.; that dream became a reality when he convinced two Rapid City directors to invest in a Great Falls track. Hartwell designed the track, oversaw its building, and handled the publicity for the grand opening of what became a successful racetrack.

A year later, Hartwell moved to Arizona and worked in the money room at Phoenix and in the mutuel department in Tucson, later working at Yuma. He then crossed the border to work at Agua Caliente in Mexico. Hartwell recalls one of the saddest days of his career was when he watched in the parking lot as the Tijuana racetrack burned. The track started racing again as soon as a temporary grandstand could be constructed.

After the death of his father in 1979, the younger Hartwell noted: “I was about the last person around that had lived through the early years (of Greyhound racing) and knew some of the old-timers that were still around.” He began writing a book titled, “The Road to Emeryville: A History of Greyhound Racing,” which became the most complete history book of Greyhound racing in America. The book was published in 1980 and reprinted in 2003.