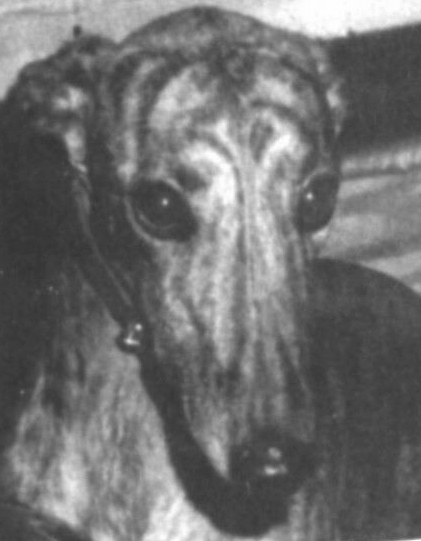 Whelped in October of 1986, Representation came from a long line of good breeding. She was the daughter of 1990 Hall of Fame inductee Dutch Bahama, who was a two-time American Derby winner, two-time All American, and a national sire champion. Her dam was Lear Jet, out of Share Profit* and Tish The Dish, who had a strong reputation as a fine brood matron.

Breeder Wayne Strong sold Representation to Ernest J. Butler in late 1988, and she began racing with Greymeadow Kennel. She ran Grade A at Wonderland before an injury brought an end to her career on the track.

Greys Betsy Ross, All-America 1998, was from Representation’s last litter, a second mating with Mi Designer. She won the Derby Lane Distance Classic, was second in the Wonderland Derby, and fourth in the St. Petersburg Derby before producing some excellent greyhounds of her own.

Two time (2001 and 2002) All-American Talentedmrripley, who also won the 2002 Flashy Sir and 2001 Rural Rube awards, was out of Greys Statesman, Representation’s son with Hall of Famer K’s Flak. Greys Statesman was named to the Top 10 in Sire Standings for five straight years, four of those being in the Top 5. Prior to his stud career, Greys Statesman was an outstanding stake Greyhound, winning the 1993 Derby Lane Distance Classic and placing second in the Wonderland Derby.

A daughter from the K’s Flak and Representation mating, Greys Julianna is one of only two females to produce from two different sires two All Americans, Greys Outbound (1999) and Greys Free Bird (2000). Greys Outbound, out of Oswald Cobblepot, won the Derby Lane Sprint Classic. Greys Free Bird, out of Fortress*, won the Wonderland Derby, was runnerup in the St. Petersburg Derby and a finalist in the Derby Lane Distance Classic.