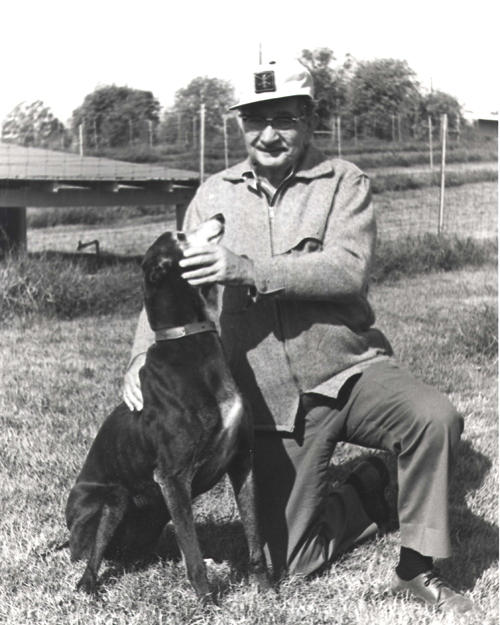 The past several articles I’ve written have centered around legendary speed dogs like, Downing, PL Greer, Lucky Bannon, Velvet Sis and the great Feldcrest. K’s Flak had a style quite different from them, although he had some early speed, he was known for his dominating stretch drives. In fact, having seen the Flak run I can honestly say I’ve never seen a more dominant racer in my life.

K’s Flak was born on April 25, 1977. He was the only fawn brindle male in a litter of six. His sire was the great Onie Jones and his mommy was a prolific producer named Montague Memory. They were whelped on the Ocala, Fl., farm of super breeder Orville Moses. At the young age of two months old Moses sold the entire litter for $2,500 to Jack Kahn. Jack and his long time trainer, G.W. (Bill) Henderson transported the pups to Kahn’s Pinellas Park, Fl., farm where they were raised by Henderson.

When the pups were of training age, it didn’t take long to notice how aggressive they were, though as a pup in training K’s Flak did not stand out over his littermates. Eventually the time came for the young Flak and littermates to begin their careers as track dogs.

The first racing action the litter saw was at Tampa. Kahn’s farm trainer, Bill Henderson, was also the track trainer at Tampa. Rarely do you find a trainer who works both at the farm and the track. Years before, Henderson had the pleasure of training another great Greyhound named LB’s Dallas Girl who some will recognize her as the mommy of Sun Bow’s Best,and sire of Track Ace, Big Ziggy. After 35 years in the business Bill has retired to his native state of Kansas.

In a conversation I had with Bill, he told me that K’s Flak and littermates developed slowly. Much to my surprise The Flak did not run the grade ladder from Maiden to A. He didn’t even win his Maiden right away, though it was clear early on the whole litter had stake potential coming from the Moses farm and having an impeccable bloodline. It’s difficult to believe there wouldn’t at least be one exceptional track dog in that litter. After all Montague Memory could have never thrown a dud litter, especially out of Onie Jones! By the time the racing operation moved from Tampa to Derby Lane it was clear the whole litter was exceptional.

K’ s Thunder was the best of the litter before losing two toes to injury. He had the cyclonic finish of the Onie Jones style. The racing career that K’s Flax had was nothing short of spectacular. In the eyes of most long time Greyhound racing analysts, he stands as the best router of all time.

His first stake win came in the Tampa Juvenile on the outside lure. He next made the final of the Derby Lane Sprint Classic which he didn’t win. However, shortly after he broke the Derby Lane 5/16 track record. Now, there was no holding him back.

Onto Biscayne for the Irish-American where the training job was given to Evan (Smokey) Anyon of the Dick Andrews Kennel. It was billed as the Flak against the pack. He won that stake by an incredible 12 lengths. He broke the Biscayne course track record which is a little longer than a 5/16 distance. A trip to Boston for the Wonderland Derby saw the Flak win it by 10 lengths, shattering the 3/8 track record at the same time leaving a new mark of 38.53.

He made a plethora of the top stake dogs look awful—average. Don Cuddy was given the honor of handling K’s Flak while at Wonderland. When it came time to return to Tampa it was back to the 5/16 distance which didn’t stop him from winning the ‘79 Tampa Inaugural. He followed that by re-breaking his own Biscayne track record lowering it to 32.93.

K’s Flak had his career cut short by a calcified toe in June of 1980. In the fall of 1980 after breeding over 20 females Jack Kahn brought him out of retirement for a chance to win the Crown Jewel of Greyhound Racing, the American Derby at Taunton. Flak would be the 7th straight generation of his own bloodline to grace the Taunton oval. Montague Memory’s grandam, Realty was a strong Taunton runner, though she was over aggressive at times, earning a few bore out comments during her racing career.

When K’s Flak arrived at Taunton, I was one of many New England racing fans who drove down Rt. 44 to see the great one school in. What I saw was not the same stake ace of old. He could not overcome his injuries and made a quick exit back to Florida. Keith Dillon’s Southland ace, Position won it that year.

Just before the Biscayne Irish-American, Kahn asked his friend Dick Andrews if he was interested in buying K’s Flak for $200,000. For that amount of money Dick asked for some time to think about it. Later, Dick was able to put together a syndicate, having found buyers for seven shares at $25,000 a share. Dick was keeping three shares for himself.

He had also arranged for an insurance policy with Loyds of London for $200,000. Kahn actually thought he had better dogs than Flak in K’s Viking and K’s Clown. Once the Irish- American was over, Kahn had changed his mind about selling the Flak. He realized that Flak was his best Greyhound. Kahn apologized to Dick Andrews about changing his mind, but Dick being the friend and gentlemen he was, he told Jack it was all right and that he totally understood. Then he wished Jack great success with the dog.

In the end, K’s Flak had over 40 wins in his short career and was voted the ‘79 Flashy Sir Award winner. He was also the captain of the All-America team and finished a close second for the Rural Rube Award given to the nation’s top sprinter.

In 1987 K’s Flak, along with dad Onie Jones, were inducted into the Greyhound Hall of Fame as father and son. K’s Flak also holds the distinction of being the first living Greyhound to acquire this achievement.

K’s Flak worked extremely well with certain bitch lines. The most well known were with bitches sired by Sandy Printer, Carry On, Understood and Dutch Bahama.

I’ve written about and studied the bloodlines of Orville Moses many times over. His lines have endured over five decades, and continue to have impact on North American stake events with every passing day. The dominance of K’s Flak was a fitting end to the decade of the 70’s. Future generations will find the name of the Great K’s Flak emblazoned in the lines of the Champions of tomorrow.

I wish to thank the wonderful Barbara Andrews for all her help, and I also owe a thank you to G. W. (Bill) Henderson.