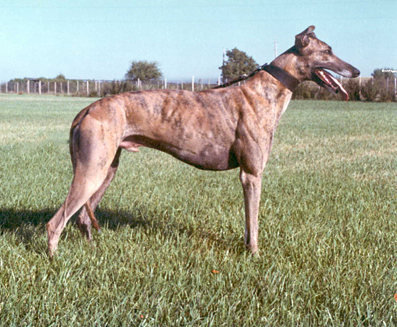 Whelped on Nov. 25, 1974, Rooster Cogburn was bred and owned by Wayne Strong of Abilene, Ks. The red brindle son of Friend Westy and Miss Gorgeous proved to be highly successful both on the racetrack and as a sire.

Rooster Cogburn was victorious at four different tracks in 1977, including being the class sprinter at Wonderland that summer with an 18-7-0 record in 29 outings. He was one of the few Greyhounds to challenge the infamous Downing, perhaps the greatest racing champion of that decade who was inducted into the Hall of Fame in 1984. Their rivalry led to America’s last great match series, in 1977.

At the end of that year, Rooster’s record was 43-17-5-4 in 87 starts in stake or stake-quality competition. He was named to the 1977 All-America team and he finished second in the National Greyhound Association’s Rural Rube Award vote, both behind Downing.

Midway through 1978, Rooster Cogburn suffered an injury that ended his astounding racing career. Even so, he was named to the All-America second team and finished second in the NGA’s Rural Rube Award vote. He finished his career with a 59-23-7 mark in 119 starts at Derby Lane, Wonderland, Wheeling, Hollywood and Cloverleaf.

As a sire, Rooster finished in the Top 10 of the Sire Standings twice in the early 1980s, producing a number of top racing stars. Among them, Hondo Monopoly won 53 races in just 80 starts at Wonderland. Hondo Monopoly sired DG’s Dealer, a two-time All-American.

Another great Rooster son was OK Troy, who captured the Great Race and went on to be Wonderland’s all-time race winner. A great-grandson, P’s Raising Cain, produced a record-breaking seven All-Americans, including Dominator, the first winner of both the Rural Rube and Flashy Sir awards. Another great-grandson, Oswald Cobblepot also sired seven All-Americans, who won a total of nine All-America trophies. Another descendant was Be My Bubba, who at one time was racing’s richest Greyhound with more than $300,000 in earnings.

His offspring continue to carry on the family name and outstanding winning tradition; his line is a strong and permanent branch of the American Greyhound breed, according to Gary Guccione, secretary-treasurer of the NGA. “Exactly half of the All-America teams from 2003 to 2005 are descendants of Rooster Cogburn. He has indeed left an indelible mark on the Greyhound breed.”