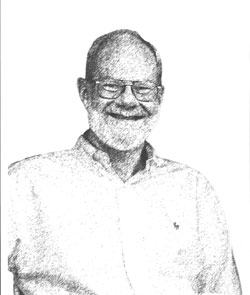 Vey Odom Weaver was born into the greyhound business on October 10, 1954, as the family owned St. Petersburg Kennel Club, now operating as Derby Lane, was entering a third decade of operation.

Under the tutelage of his father A. V. “Arthur” Weaver, Vey was introduced to the company’s business side. Art’s open door policy to kennel operators and trainers introduced Vey to the greyhound world.

Vey’s involvement in sports in school was limited because to Vey there was nothing like the sport of greyhound racing. The huge crowds that cheered loudly for the four-legged superstars racing around the oval each season was much more exciting than school athletics.

At 15, Vey worked as a leadout and enjoyed rooting for the greyhounds that he led to the starting box. He learned all the track jobs while attending college at the University of South Florida.

Upon graduation in 1977 Vey joined the family business full time and became involved in esteemed events like the Grand Prix and the Greyhound Race of Champions.

Vey loved the fanfare of each new season and many times he would get a first look at the greyhound stars at the fall NGA meet. In 1983 Vey accepted a position on the Greyhound Hall of Fame board. He served two terms from 1983 to 1992 and again from 1997 to 2010. He also served on various committees on the American Greyhound Council and the AGTOA.

As president of the Greyhound Hall of Fame, Vey’s goals included expanding the exhibits in the museum, reducing the debt and creating cash reserve. In 1990 the large meeting room was altered to double as a greyhound art gallery and the exhibit galleries were renovated for the first time in celebration of the museum’s 30th anniversary in 2003.

In 1997 Weaver was instrumental in forming the Hall of Fame Club that provided additional revenue for operating expenses. Vey worked diligently to promote the club, always encouraging lovers of the sport to join the Hall Of Fame Club. When some tracks discontinued museum funding, Vey continued the family tradition of supporting the beloved museum.

In 2002 A. V. “Arthur” Weaver (Vey’s father) was inducted into the Greyhound Hall of Fame. Vey was at his side along with an entourage of company employees and additional family members that made the trip to Kansas to be part of the indelible induction.

The following year the 76-year old Art Weaver passed the company leads to his son. Vey added President to his General Manager title and began writing his own personal chapter in greyhound history.

Vey’s father had begun discussing the idea of a big event with a group of Irish businessmen. During the discussions, a game of golf was arranged. Vey handed the trophy and offered a congratulatory speech to the Irish victors.

There were many hurdles to overcome for that international event to take place. In 2006 the entire industry came together to produce the world’s biggest greyhound event in the history of the sport. Greyhound owners from the US, Ireland and Australia took part in the original Derby Lane Million Dollar stakes event.

By the time the race went off on March 4, 2006 there was barely standing room. The turnstile count was over 9,300 but that didn’t include an entire Derby Club full of industry dignitaries. An estimated 10,000 on track and thousands more at sites around the world watched as Greyhound history unfolded at the most historic venue in the world. Vey could not have been more proud to make history under his watch.

Working at the company that his great-grandfather Thomas Lee Weaver founded in 1925 has been Vey’s life. While some things have changed, He has kept some things the same… like the tradition of standing on the balcony outside of his office to watch races. Many trainers look up to see him and shout a hello while waiting for a racer to finish. And when Vey is on track he will participate in the marketing promotions. Fans enjoy the President of the Company drawing the lucky “CASH” winner.

Vey Weaver has spent 60 years in the Derby Lane “dog house”. He has served the greyhound industry for years in many capacities including his tenure at the Greyhound Hall of Fame as President.

Tonight Weaver’s induction is both humbling and rewarding. Vey will be immortalized in Hall of Fame history as he joins his father and other family members that are etched in the Pioneer section: T. L. ‘Dad” Weaver, A. D. Weaver, Otto L. Weaver, A. V. “Tubby” Weaver and John and Joyce Brooks.