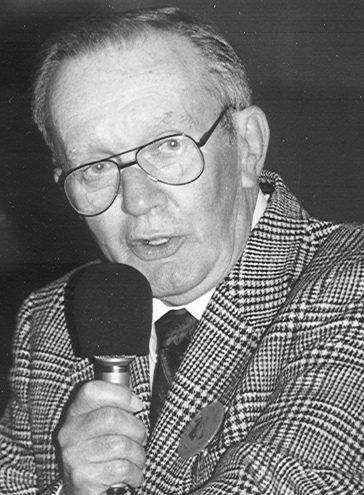 Bill Janecek’s service to the greyhound industry and its associations was “relentless and unique,” Keith Dillon wrote in a letter nominating Janecek for the Hall of Fame.

Introduced to greyhound racing in 1957, Janecek joined the National Coursing Association two years later after his first litter of greyhound puppies. He began coursing in 1961 and continued for more than 10 years.

Janecek began working as a paddock judge in the mid-1960s. When the Track Stakes started, he moved to the position of announcer.

But his most important contributions to the industry were the result of his dedication to the industry’s associations. Janecek served four years as President of the national association in the 1970s, a difficult time in the greyhound industry. He also worked for 12 years on the national association’s committee and was instrumental in changing the name of the National Coursing Association to the National Greyhound Association. Also during his tenure on the committee, the $100 initation fee for new members was established, and the NGA racetrack and Greyhound Hall of Fame were constructed.

He played an important role in the development of the NGA Auction by writing the rules for the event. The auction began in 1978 to raise money for purses and the Hall of Fame. Perhaps Janecek is best known, however, for serving as the master of ceremonies for over 35 years at the semi-annual NGA banquets honoring various people in the industry.