Home/News/Three Selected for Hall of Fame Induction
Next

Two record setting greyhounds and an industry legend have been tabbed for induction into the Greyhound Hall of Fame this coming fall. Vince Berland’s Flying Stanley, Pat Collins’ Pat C Rendezvous and owner/trainer Duane Randle will be inducted in ceremonies this October at the Hall in Abilene, KS. 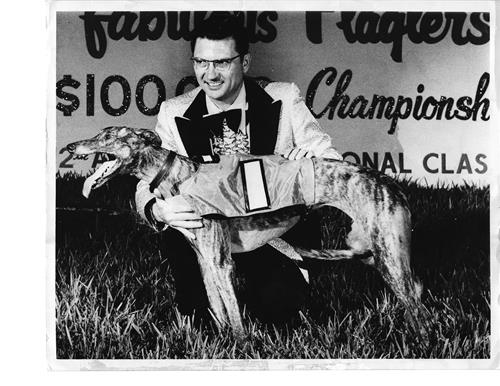 Duane Randle, part of a legendary racing family deeply rooted in greyhound history, is considered by many to be one of the great trainers and kennel operators of all time. Born, along with seven other siblings, on his parents Kansas farm, he and his brothers were immediately bitten by the greyhound bug. He first trained for the Randle Brothers Kennel in the 1950’s at the Raynham/Taunton facilities. From there he would race at tracks from Massachusetts to Arizona with stops in South Dakota, Florida and Colorado while finally settling down at Southland in Arkansas. Duane handled some great greyhounds along the way including Real Huntsman, Cost Factor, Gurley, Duggan, Earth Friend, Dark Rumor, Wild Friend and many, many more. His kennels won more than their share of stake races as well as kennel championships. In 1999 Duane was voted #9 on the list of “Great Trainers of the Century” while the Randle Brothers Kennel Operation was tabbed #1 in that same poll for “Best Racing Kennels”. Duane eventually sold his kennel operation in the mid 90’s and retired. He passed away in 2000 but left an indelible impression on the business he loved. 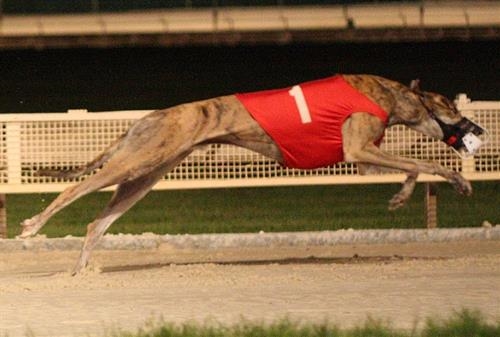 Born and raised in Abilene by owner Vince Berland, Flying Stanley is considered by some to be, perhaps the finest racing greyhound of the this young century. He may very well be the last of the great traveling stakes champions as well as he competed in some 35 stake race events at five different tracks. He made the final in 16 of those events, winning 8 of them. His wins included the $50,000 Wichita Shootout, the $75,000 Hollywood World Classic, the $50,000 Derby Lane Sprint and, of course, the Derby Lane Million which made him the top money earning greyhound in the world. He eventually tallied winnings in excess of $680,000! His career record was 86-57-8-7-4 and he won over 50 top-grade races in less than two years of racing despite the travel and early stud duties. He also set and holds the 5/16 track record of 29.48 at the Woodlands. He went on to sire over 1,000 racers on three continents producing several stake winners and finalists and has been a successful dam sire with daughters producing numerous stake finalists and winners. 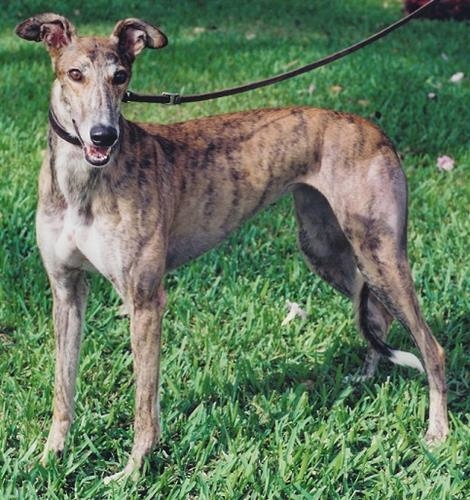 The “Pat C” moniker of Pat Collins raised greyhounds is well known throughout the greyhound industry and inductee Pat C Rendezvous may be the most well known of all. “Rhonda” as she became know, changed the landscape of greyhound racing in the early 90’s as she put together a win streak that captured national attention. Beginning on December 29, 1993 with a 3-1/2 length win over the 3/8ths mile course at Palm Beach, Rhonda would go on to win 36 consecutive races at that distance, breaking, at that time, the American and world records for consecutive victories by any greyhound. Her streak finally ended on June 25, 1994 at the hands of another outstanding racer, Picki Princess, in the $25,000 Champions Challenge. Throughout her remarkable streak Rhonda gained national for herself and the entire sport of greyhound racing receiving coverage on ESPN and other sports networks as well as gaining a full page story in Sports Illustrated. Over her career, Rhonda compiled a 141-85-20-12-5 record. In 1994, she was the North American win leader with 52 victories and was named Captain of the All American Team. She also received the Flashy Sir award that year as the nation’s première distance greyhound. She is the all time win leader at Palm Beach with 85 victories and was retired in special ceremonies at the south Florida track.