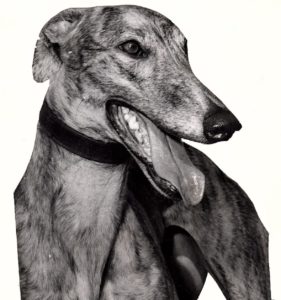 Wayside Carol was named the first Flashy Sir Award winner by the National Greyhound Association as the nation’s top distance runner in 1971.  Ironically, Wayside Carol’s pedigree through her sire, Rinaker, traces back to Just Andrew*, who’s descendants include Flashy Sir, for which the award is named and who was, in 1963, one of the first greyhounds ever to be inducted into the Greyhound Hall of Fame.

Out of Rinaker and Lady Eve, Wayside Carol was whelped on December 14, 1968 and owned by Wayside Kennel.  Although the red brindle was not a direct descendant of Flashy Sir, the two-share ancestry that includes Just Andrew*, inducted into the Hall in 1975, and his son Lucky Roll, honored in 1965.  In her bloodline also are Chief Havoc and Mutton Cutlet, both enshrined in 1974 as the first two greyhounds inducted into the International Greyhound Hall of Fame.