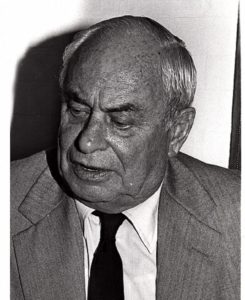 Jack Kahn produced two greyhounds that were inducted into the Greyhound Hall of Fame, K’s Flack in 1987 and K’s Broadway nearly three decades later in 2015.  K’s Flack was the first greyhound to be living at the time of his induction, he also won the Flashy Sir Award as the nation’s premier distance racer in 1979.  K’s Broadway was the Rural Rube Award winner in 1987 as the nation’s top sprinter.

Kahn was born in New Rochelle, N.Y on October 7, 1909, graduated from Cornell University in 1931, and married his wife, Louise, in 1935; the couple had two sons, Bill and Jack.  Upon graduating from Cornell, he worked for his father importing silk, and later had careers in manufacturing, television and the hotel industry.

He first was a fan of greyhound racing at Sarasota Kennel Club before becoming involved in the industry, partnering with a business associate, Joe Rosenberger, to purchase greyhounds in the early 1960’s.  Later Kahn struck out on his own and was mentored in the greyhound industry by jerry Collins, who is honored in the Pioneer section of the Greyhound Hall of Fame, and Ed Moses, who was inducted into the Greyhound Hall of Fame in 1991.

Relying on Moses’ breeding and knowledge and bloodlines, the two breeders worked together to produce numerous outstanding greyhounds.  Kahn’s greyhounds were not only excellent racers, but also continued bloodlines that still affect the quality of greyhounds being bred today.